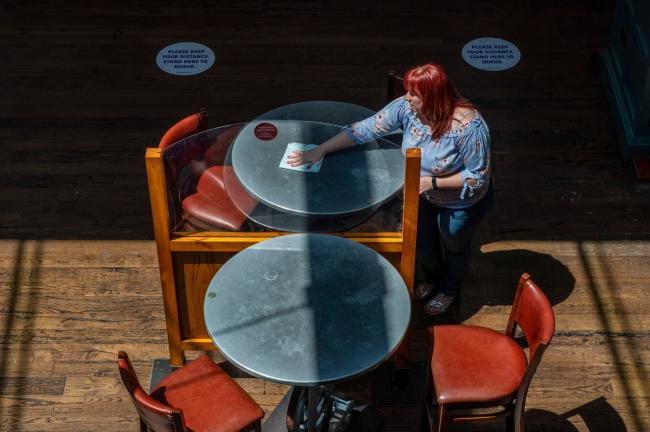 © Bloomberg. An employee cleans tables divided by a perspex screen at The Mossy Well pub, operated by J D Wetherspoons Plc, in this arranged photograph in London, U.K., on Wednesday, June 24, 2020. Hotels, pubs, restaurants and cinemas will be able to open their doors from July 4, U.K. Prime Minister said as he gave the green light for England’s beleaguered tourism and hospitality industry to restart.

(Bloomberg) — Prime Minister Boris Johnson on Friday will tell Britons to act responsibly as the U.K.’s pubs prepare to re-open, warning he’ll act to shutter parts of the economy again if the coronavirus pandemic runs out of control.

Restaurants, hotels, cinemas and hairdressers will also be allowed to open their doors again Saturday after 3 1/2 months of an economic lockdown brought in to contain the outbreak. They’ll join non-essential shops, which were allowed back earlier in the month.

“We are not out of the woods yet,” Johnson will say at a press conference Friday, according to a statement emailed by his office. “The success of these businesses, the livelihoods of those who rely on them, and ultimately the economic health of the whole country is dependent on every single one of us acting responsibly. We must not let them down.”

Johnson is trying to jump-start the U.K. economy after the pandemic killed more than 43,000 people, pushing the country into what may be the worst recession in three centuries. Earlier this week, the premier brought forward 5 billion pounds ($6.2 billion) of spending, pledging to “build, build, build” in an effort to revive economic activity, and next week, Chancellor of the Exchequer Rishi Sunak is due to unveil more measures.

Sunak is focusing on preserving as many jobs as possible so that the economy is in the best place possible to bounce back. His statement next week is likely to include a few targeted measures to help him in that aim, with a wider package of measures due in a budget in the fall.

On Friday, Labour Shadow Chancellor Anneliese Dodds will deliver her first major speech in the post, setting out four tests for Sunak’s statement, according to an emailed statement from the party. She’s previously called for an emergency budget rather than Sunak’s planned “summer statement.”

Dodds will say Sunak’s package must create and protect jobs, ensure any economic bounce-back extends across the country and cut greenhouse gas emissions. The chancellor should also pledge not to raise taxes or cut support for low and middle-income people during the recovery, according to Dodds.

She’ll also call on Sunak to extend the government’s furlough program — due to end on Oct. 31 — in areas where local lockdowns are needed and in sectors of the economy that are struggling to restart, saying “the reward for months of sacrifice cannot be a redundancy notice.”

“As with the lifting of lockdown, what we have now is an exit without a strategy. Government must abandon its one-size-fits-all wind-down of the Job Protection and self-employed schemes,” Dodds will say. “We need a targeted strategy that acknowledges that workers in struggling sectors cannot and should not be treated the same way as workers in sectors that are already back to full capacity.”

The government is paying 80% of the wages for 9.3 million private sector jobs at a cost of 25.5 billion pounds under the program, which will begin to taper next month as companies take on more of the costs.

With the country emerging from lockdown, the government is still wary of a resurgence in coronavirus cases, and has pledged to deploy a “whack-a-mole” strategy to quash any localized outbreaks by having more targeted lockdowns. The central English city of Leicester was placed under such provisions earlier this week.

When the pubs re-open, the government is keen to avert scenes such as on the country’s beaches last week, when social distancing was abandoned as warm weather lured Britons in their thousands to the coast. On Thursday, the Health Department published guidance for the hospitality sector to help with the government’s test and trace program. Pubs, hotels and restaurants were told to collect the names and phone numbers of clients and retain them for 21 days so that they can be contacted if anyone at the venue is later identified as suffering from the virus.

“The virus is still with us and the spike in Leicester has shown that,” Johnson will say. “If it starts running out of control again the government will not hesitate in putting on the brakes and re-imposing restrictions.”